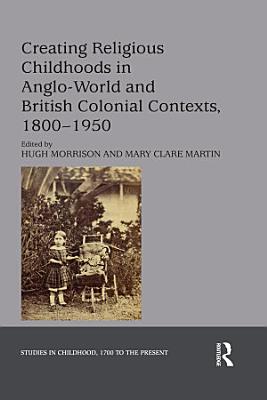 Drawing on examples from British world expressions of Christianity, this collection further greater understanding of religion as a critical element of modern children’s and young people’s history. It builds on emerging scholarship that challenges the view that religion had a solely negative impact on nineteenth- and twentieth-century children, or that ‘secularization’ is the only lens to apply to childhood and religion. Putting forth the argument that religion was an abiding influence among British world children throughout the nineteenth and most of the twentieth centuries, this volume places ‘religion’ at the center of analysis and discussion. At the same time, it positions the religious factor within a broader social and cultural framework. The essays focus on the historical contexts in which religion was formative for children in various ‘British’ settings denoted as ‘Anglo’ or ‘colonial’ during the nineteenth and early- to mid-twentieth centuries. These contexts include mission fields, churches, families, Sunday schools, camps, schools and youth movements. Together they are treated as ‘sites’ in which religion contributed to identity formation, albeit in different ways relating to such factors as gender, race, disability and denomination. The contributors develop this subject for childhoods that were experienced largely, but not exclusively, outside the ‘metropole’, in a diversity of geographical settings. By extending the geographic range, even within the British world, it provides a more rounded perspective on children’s global engagement with religion.

Drawing on examples from British world expressions of Christianity, this collection further greater understanding of religion as a critical element of modern ch

Protestant Children, Missions and Education in the British World

Religious Education and the Anglo-World

Focusing on Australia, Canada, and New Zealand, Religious Education and the Anglo-World examines the relationship between empire and religious education. Demons

Critical Readings in the History of Christian Mission

This selection of texts introduces students and researchers to the multi- and interdisciplinary field of mission history. The four parts of this book acquaint t

Brings together the work of a wide range of scholars to explore the history of churches and education.

Children’s Voices from the Past

This book explores a central methodological issue at the heart of studies of the histories of children and childhood. It questions how we understand the perspec

The Bloomsbury Reader in Religion and Childhood

From recent sex abuse scandals in the Roman Catholic Church, to arguments about faith schools and religious indoctrination, this volume considers the interconne

Missionaries have been subject to academic and societal debate. Some scholars highlight their contribution to the spread of modernity and development among loca

Religion and Education: Framing and Mapping a Field

Colonising Disability explores the construction and treatment of disability across Britain and its empire from the nineteenth to the early twentieth century. Dr