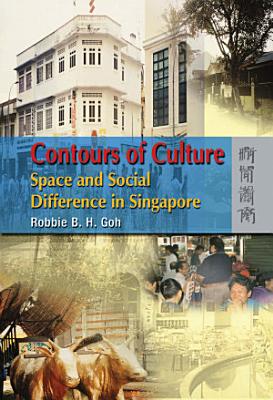 This volume discusses the urban history and cultural landscape of Singapore in relation to theories of textual dialogics, multiculturalism and the cultural and political unconscious. Multidisciplinary in approach, it takes as its data not only government policy and official discourses, and the more quantitative elements of population census information on religion, income, race and nationality, but also a wide range of related cultural discourses in film, literature, media texts, social behaviour and other interventions and interpretations of the city. The main parameters of Singapore’s socio-national construction—public housing, social elitism, racial and linguistic plurality and their management, colonial remnants and their transformation—are explained and analysed in terms of Singapore’s colonial past, its rapid modernization, and its current push to compete as a global city and tourist destination. This multidisciplinary book should be of interest to a correspondingly wide readership, including architects and urban planners, political scientists, cultural analysts and theorists, colonial discourse scholars, urban geographers and sociologists, Asian studies specialists, graduate and undergraduate students in the above areas, and a general readership interested in cities and cultures. “This is a remarkable book. By taking a series of readings of Singapore’s urban culture, it chronicles the emergence of a new city form which, through the coming together of quite particular narratives of modernity, nationhood and identity may well be providing a much more general spatial model for Asian cities. Simultaneously, it provides a gripping account of how to read the possibilities and tensions that this model throws up.” —Nigel J. Thrift, Oxford University “Goh’s theoretically sophisticated and creative analysis of Singapore’s society, space and culture and his brilliant critique of the city’s official policies of self-representation is a marvellous tour de force. An astute urban semiotician and interpreter of cultural signs, Goh draws on films, figures and fiction to provide a fascinating reading of a city preparing for global competition. Questions of ethnicity, class, sexuality, national identity, architecture and space are brought together in an imaginative—as well as provocative—exercise of symbolic explication and analysis. Essential for studies of Asian urbanism and a model for students of the (so-called) ‘global city’.” —Anthony King, State University of New York at Binghamton “In Contours of Culture Robbie Goh has achieved what many specialists in cultural studies have attempted only metaphorically, by successfully fusing the materiality of spatiality with the symbolic realm of cultural processes. The result is an absorbing and nuanced interpretation of the meaning of the landscapes of Singapore, where space serves as a text that reflects and reproduces the political cultures of a global city in a state of constant re-invention.” —David Ley, University of British Columbia, Canada

This volume discusses the urban history and cultural landscape of Singapore in relation to theories of textual dialogics, multiculturalism and the cultural and

Comprises articles on the life and work of Satya Prakash, b. 1914, Indologist, and papers, most on the history and culture of Rajasthan, India.

In Contours of Culture the authors address practical and theoretical problems of using ethnographic methods in the study of culture, drawing on their field rese

The SAGE Dictionary of Cultural Studies

Contains over 200 entries on key concepts and theorists of cultural studies.

This book examines the political debates over the access to live telecasts of sport in the digital broadcasting era. It outlines the broad theoretical debates,

In Contours of White Ethnicity, Yiorgos Anagnostou explores the construction of ethnic history and reveals how and why white ethnics selectively retain, rework,

Contours of a People

What does it mean to be Metis? How do the Metis understand their world, and how do family, community, and location shape their consciousness? Such questions inf

An Introduction to Critical Criminology