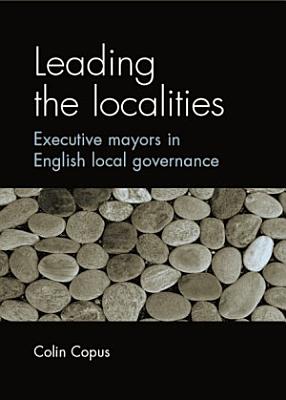 This book, now available in paperback, is the result of national research conducted amongst England’s directly elected mayors and the councillors that serve alongside them. It is the first such major publication to assess the impact on local politics of this new office and fills a gap in our understanding of how the Local Government Act 2000 has influenced local governance. The book also draws from a range of research that has focused on elected mayors - in England and overseas - to set out how the powers, roles and responsibilities of mayors and mayoral councils would need to change if English local politics is to fundamentally reconnect with citizens. It not only explores how English elected mayors are currently operating, but how the office could develop and, as such, is a major contribution to the debate about the governance of the English localities.

This book, now available in paperback, is the result of national research conducted amongst England’s directly elected mayors and the councillors that serve a

This book is an explanation of the long-standing interrelationship between local government and political parties. It examines and outlines the differences betw

In defence of councillors

By using qualitative research from a number of related projects, the book examines the roles, functions and responsibilities of councillors and the expectations

HC 369 - Devolution: The Next Five Years and Beyond

The Government has announced a 'devolution revolution', transferring powers and opportunities to local government through a series of 'devolution deals'. The Ci

The revised and updated eighth edition of the bestselling textbook Politics UK is an indispensible introduction to British politics. It provides a thorough and

Bringing together research on different features of the democratic renewal agenda to investigate how local authorities are responding, this text includes a cont

Councillors on the Frontline

Councillors have a vital role to play if communities are to make the most of the opportunities offered by localism, and people from all walks of life should be

Policy Making at the Second Tier of Local Government in Europe

This book develops and tests a typology of local state-society relations. To deliver such a comparative study on institutionalized relations between local gover