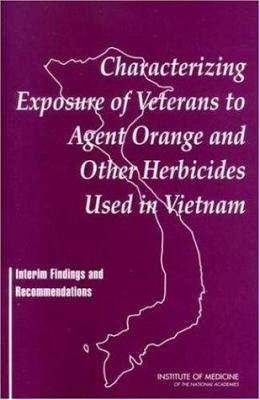 From 1962 to 1971, US military forces sprayed more than 19 million gallons of herbicides over Vietnam to strip the thick jungle canopy that helped conceal opposition forces, to destroy crops that enemy forces might depend on, and to clear tall grass and bushes from around the perimeters of US base camps and outlying fire-support bases. Most large-scale spraying operations were conducted from airplanes and helicopters, but herbicides were also sprayed from boats and ground vehicles, and by soldiers wearing back-mounted equipment. After a scientific report concluded that a contaminant of one of the primary chemicals used in the herbicide called Agent Orange could cause birth defects in laboratory animals, US forces suspended use of the herbicide; they subsequently halted all herbicide spraying in Vietnam in 1971. At the request of the Veteran's Administration, the Institute of Medicine established a committee to oversee the development and evaluation of models of herbicide exposure for use in studies of Vietnam veterans. That committee would develop and disseminate a request for proposals (RFP) consistent with the recommendations; evaluate the proposals received in response to the RFP and select one or more academic or other nongovernmental research groups to develop the exposure reconstruction model; provide scientific and administrative oversight of the work of the researchers; and evaluate the models developed by the researchers in a report to VA, which would be published for a broader audience. Characterizing Exposure of Veterans to Agent Orange and Other Herbicides Used in Vietnam is the IOM's report that evaluates models of herbicide reconstruction to develop and test models of herbicide exposure for use in studies of Vietnam veterans.

From 1962 to 1971, US military forces sprayed more than 19 million gallons of herbicides over Vietnam to strip the thick jungle canopy that helped conceal oppos

Authors: Institute of Medicine (U.S.). Committee on the Assessment of Wartime Exposure to Herbicides in Vietnam
Categories: Agent Orange

Authors: Institute Of Medicine Committee on the Assessment of Wartime Exposure to Herbicide
Categories: Agent Orange

From 1972 to 1982, approximately 1,500-2,100 US Air Force Reserve personnel trained and worked on C-123 aircraft that had formerly been used to spray herbicides