California Cures!: How The California Stem Cell Program Is Fighting Your Incurable Disease! 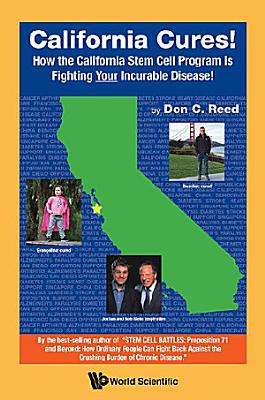 Thirteen years ago, America faced an epidemic of chronic disease: cancer, paralysis, blindness, arthritis, Alzheimer's disease, diabetes and more. But California voters said "YES!" to a $3 billion stem cell research program: the awkwardly-named California Institute for Regenerative Medicine (CIRM). Born into battle, the scrappy little state agency was immediately blocked by three years of anti-science lawsuits — but it defeated them all. And then? A quiet triumph. With a focused intensity like the Manhattan Project (but for peaceful purposes, not to build a bomb), scientists funded by CIRM took on the challenges: disease and disability called chronic: incurable. In a series of connected stories, accurate though written to entertain, "California Cures" relates a war: science against disease, with lives on the line. Think what it means for a paralyzed young man to recover the use of his hands, or for a formerly-blind mother to see her teenaged children — for the first time! Do you know the "bubble-baby" syndrome? Infants without a proper immune system typically die young; a common cold can kill. But for eighteen babies in a stem cell clinical trial, a different future: they were cured of their disease. No one can predict the pace of science, nor say when cures will come; but California is bringing the fight. The reader will meet the scientists involved, the women and men behind the microscope, and share their struggle. Above all, "California Cures" is a call for action. Washington may argue about the expense of health care (and who will get it), but California works to bring down the mountain of medical debt: stem cell therapies to ease suffering, and save lives. Will California build on success — and invest $5 billion more in stem cell research? "We have the momentum," says author Don C Reed, "We dare not stop short. Chronic disease threatens everyone — we are fighting for your family, and mine!" Contents: Introduction: Evangelina and the Golden State The Absolute Minimum You Need to Know First To Breathe, or Not to Breathe The Strongest Man in the World When the Dolphin Broke My Ear The Boy with Butterfly Skin The Great Baldness "Comb-Over" Replacement? "He Sees! He Sees!" Cop at the Window "Go West, Young (Wo)Man" — To a Biomed Career? And How Will You be Paying for that New Heart? The Answer to Cancer? A Political Obstacle to Heart Disease Cure? Your Friend, the Liver! "Bring 'em Back Alive" The Color of Fat Revenge for My Sister A Story with No Happy Ending? Aging and Stem Cells The "Impending Alzheimer's Healthcare Disaster" President Trump's Great Stem Cell Opportunity Leiningen's Ants and Parkinson's Disease On the Morality of Fetal Cell Research Democracy and Gloria's Knees Three Children, and the Eternal Flame Autism, Mini-Brains, and the Zika Virus Why "The Big Bang Theory" Matters to Me Musashi and the Two-Sword Solution "The Magnificent Seven" The Connecticut Commitment In Memory of Beau To Relocate Alligators, or Turn a Country on to Biomed? Whale Sharks and Outer Space Mr Science Goes to Washington? When Oklahoma is Not Ok James Bond and Melanoma Neurological Diseases vs. California Driving to the Storm Door into Tomorrow Stem Cell Battles — On Times Square? Annette, Richard Pryor, and Multiple Sclerosis Mike Pence, and Reproductive Servitude Motorcycle Wrecks and Complex Fractures Even Dracula Gets Arthritis Tugboat for Cure Wheelchair Warriors, Take Back Your Rights! Sickle Cell Dis

California Cures!: How The California Stem Cell Program Is Fighting Your Incurable Disease!

For author Don C Reed, father of a paralyzed son, the California Institute for Regenerative Medicine (CIRM) is the greatest medical advance since penicillin.REV

Stem Cells: From Hype To Hope

During the last two decades, stem cells have progressed from merely a concept to a vibrant field of regenerative medicine which is aimed at addressing the root

Stem Cell Battles: Proposition 71 and Beyond

' This is a one-of-a-kind book: combining easy-to-understand science, in-the-trenches political warfare, and inspirational stories. It aims to give hope to indi

The University of Chicago Magazine

Departments of Labor, Health and Human Services, and Education, and Related Agencies Appropriations for Fiscal Year 2001

While social work policy can be considered the what, and practice, the how, the study of human behavior is concerned with why. Why do people do the things they

"Beginning with a look at his early life and the people and circumstances that shaped his thinking, the book situates Schopenhauer's philosophical work within t

Lives of the Monster Dogs

When a race of elegant, superintelligent dogs arrives in twenty-first-century New York, they become instant celebrities, but, unable to adjust to the modern wor