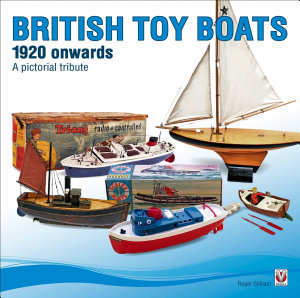 Toy boats, especially those designed to sail on the local pond, have always had a fascination for boys and girls of all ages. This book celebrates these boats, which many will remember purchasing with their pocket money. Before the 1914-1918 war many toy boats were of German origin, but when hostilities ceased there was a surge in buying British. Many manufacturers took advantage of this, and British toy boats became extremely popular right up to World War II, with numerous seaside resorts actually building special ponds for yachts and clockwork vessels. Interest continued right up to the introduction of electronic toys, at which point the majority of manufacturers realized that the more traditional toy boat was no longer in demand. This book covers that golden period of toy boats, from 1920 to 1960.

Toy boats, especially those designed to sail on the local pond, have always had a fascination for boys and girls of all ages. This book celebrates these boats,

The Real Way Round

This is a pictorial diary of a once-in-a-lifetime motorbike trip across 35 countries, and a practical guide to motorcycling around the world - what to do first,

While many will be familiar with 1960 Ford racing programmes using the very compact pushrod Small Block V8, few know the facts behind the technology employed at

A comprehensive, radical look at the history and development of the Type 57 Grand Prix Bugattis. New material challenges traditional beliefs about these histori

Tatra – The Legacy of Hans Ledwinka

Hans Ledwinka’s innovative Tatra cars were models of design excellence, and were highly influential in shaping modern car design concepts and the development

How to Modify Your Retro Or Classic Car for High Performance

How to modify and upgrade a retro or classic saloon or sports car for modern road or motorsport use, instruments, engine, gearbox, overdrive, wheels, tyres, sup

Years of meticulous research have resulted in this unique history, technical appraisal (including tuning and motorsports) and data book of the Ford V8 Cleveland

A biography of motor racing mechanic Tony Robinson, who worked with some of the great names of the sport in the 1950s and '60s.

It’s hard to believe, but the W129-series Mercedes-Benz SL was launched over 20 years ago. However, its timeless styling has kept it fresh and attractive in t