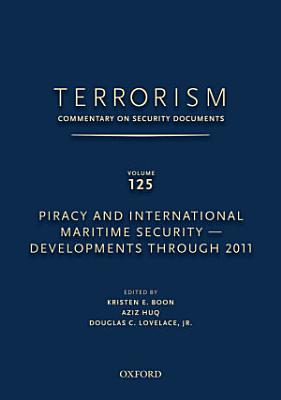 Terrorism: Commentary on Security Documents is a series that provides primary source documents and expert commentary on various topics in the worldwide effort to combat terrorism. Among the documents collected are transcripts of Congressional testimony, reports by such federal government bodies as the Congressional Research Service (CRS) and the Government Accountability Office (GAO), United Nations Security Council resolutions, reports and investigations by the United Nations Secretary-General and other dedicated UN bodies, and case law from the U.S. and around the globe covering issues related to terrorism. Most volumes carry a single theme, and inside each volume the documents appear within topic-based categories. The series also includes a subject index and other indices that guide the user through this complex area of the law. Volume 125, Piracy and International Maritime Security - Developments Through 2011, builds upon the maritime security issues presented previously in Volume 112 to detail the most recent initiatives at the multinational, regional, and domestic levels towards eradicating the maritime security threat stemming from piracy and armed robbery off the coast of Somalia. Professor Kristen Boon has organized and framed investigative reports by the UN Secretary-General, UN Security Council Resolutions, documents by UN bodies and NGOs, and international caselaw in order to detail efforts by the global community, including the UN's Contact Group on Piracy Off the Coast of Somalia, towards ending the immediate threat of piracy and armed robbery off the Somali Coast while also addressing its underlying causes.

Terrorism: Commentary on Security Documents is a series that provides primary source documents and expert commentary on various topics in the worldwide effort t

In this dissertation, I examine the experiences of Somali children and youth in both state sponsored and community educational spaces in North America to invest

Children and Youth in Armed Conflict

This is a book that students and professionals from different disciplines and backgrounds, including from academia, international organisations, non-governmenta

Routledge Handbook of Conflict Response and Leadership in Africa

This handbook explores the challenges and opportunities for leadership and conflict response in the context of Africa at several levels. Leadership plays a vita

In armed conflicts around the world, children are being killed, raped, abducted and recruited to fight at a shocking scale. In light of this continuing general

Will you listen? Young voices from conflict zones

"The 1996 UN report "The Impact of Armed Conflict on Children", widely known as the Machel study, for the first time brought the issues faced by children in arm

When wars break out, international attention and media reporting invariably focus on the most immediate images of human suffering. Yet behind these images is a

Using the Convention on the Rights of the Child as a framework, issues such as child trafficking, child soldiers and child maltreatment are examined in nations