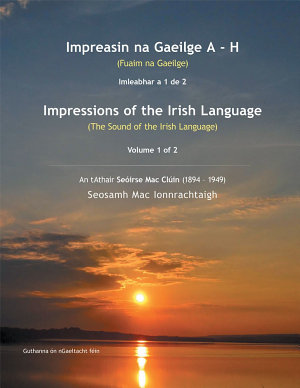 Impreasin na Gaeilge / Impressions of the Irish language (2014) is a research book on the sound of the Irish language based on native voices of the Gael from the Gaeltacht itself. The book is based on empirical work by two authors from County Clare. An tAthair Seóirse Mac Clúin based Réilthíní Óir on the Irish of the Great Blasket Islands. Réilthíní Óir comprised the native Irish of Tomás Ó Criomhthain and the islanders of the Great Blasket Islands prior to 1922. The original title is revised in full with modern additions based on current native Irish (2007-2014). The language planning researcher is Seosamh Mac Ionnrachtaigh from Kilrush West Clare. This combined research results in an Irish-Irish Dictionary of the Irish language with key explanations in English.

Short Stories in Irish for Beginners

Bilingual Edition English-Irish Gaelic "Am I small?" - Tamia is not sure and keeps asking various animals that she meets on her journey. Eventually she finds th

This learner's dictionary guides students and other users through the intricacies of the Irish language.

Chinese/Mandarin Chinese [Simplified]-Irish Gaelic (Gaeilge) Bilingual Edition "Am I small?" - Tamia is not sure and keeps asking various animals that she meets

Short Stories of Padraig Pearse: The Easter Rising Hero of 1916

Pádraic Pearse, who played a prominent part in the 1916 rebellion, declared Ireland a Republic from the steps of the General Post Office in Dublin. He was exec

Colloquial Irish 2 is the ideal way to refresh your knowledge of the language and to extend your skills from the beginner level to advanced beginner. Structured