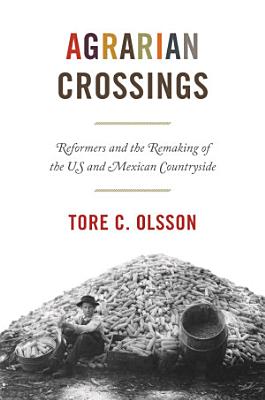 In the 1930s and 1940s, rural reformers in the United States and Mexico waged unprecedented campaigns to remake their countrysides in the name of agrarian justice and agricultural productivity. Agrarian Crossings tells the story of how these campaigns were conducted in dialogue with one another as reformers in each nation came to exchange models, plans, and strategies with their equivalents across the border. Dismantling the artificial boundaries that can divide American and Latin American history, Tore Olsson shows how the agrarian histories of both regions share far more than we realize. He traces the connections between the US South and the plantation zones of Mexico, places that suffered parallel problems of environmental decline, rural poverty, and gross inequities in land tenure. Bringing this tumultuous era vividly to life, he describes how Roosevelt’s New Deal drew on Mexican revolutionary agrarianism to shape its program for the rural South. Olsson also looks at how the US South served as the domestic laboratory for the Rockefeller Foundation’s “green revolution” in Mexico—which would become the most important Third World development campaign of the twentieth century—and how the Mexican government attempted to replicate the hydraulic development of the Tennessee Valley Authority after World War II. Rather than a comparative history, Agrarian Crossings is an innovative history of comparisons and the ways they affected policy, moved people, and reshaped the landscape.

In the 1930s and 1940s, rural reformers in the United States and Mexico waged unprecedented campaigns to remake their countrysides in the name of agrarian justi

Today, a new generation of farmers are working to heal both the land and agriculture's legacy of racism. In Healing Grounds, Liz Carlisle tells the stories of I

The Green Revolution in the Global South

Abandoning Their Beloved Land offers an essential new history of the Bracero Program, a bilateral initiative that allowed Mexican men to work in the United Stat

This book examines the role of experts and expertise in the dynamics of globalisation since the mid-nineteenth century. It shows how engineers, scientists and o

Better Living by Their Own Bootstraps

"Better Living by Their Own Bootstraps is the first major study to consider Black women's activism in rural Arkansas. The text explores Arkansas's rural history

The first relational study of twentieth-century U.S. guestworker programs from Mexico and the Caribbean, Contracting Freedom explores how 1940s debates over lab

This book explores the significance of the peach as a cultural icon and viable commodity in the American South.

The YMCA in Late Colonial India

This book explores the history and agendas of the Young Men's Christian Association (YMCA) through its activities in South Asia. Focusing on interactions betwee