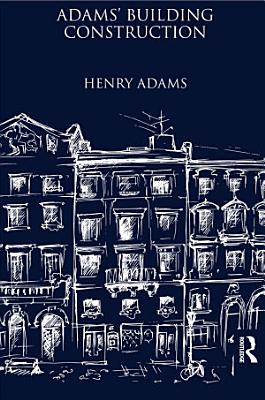 Henry Adams' Building Construction was first published in 1906. It was reprinted several times and revised in 1912 with the addition of 24 pages on reinforced concrete. Beautifully illustrated with over 2,300 engravings and twelve tinted plates, it is reprinted here, unabridged, for the first time in nearly one hundred years. Adams' work sits comfortably alongside the other great construction books of the period: "Rivingtons" (also facsimiled by Donhead) and "Mitchell's". The latter two were actually slightly earlier: "Rivingtons" had already reached its fifth edition by 1906, and "Mitchell's" was in its seventh. Nevertheless Adams was hugely popular, selling over 40,000 copies in its first decade. There seems to be little doubt that its great advantage over its rivals was its format: while the others consisted of several volumes, Adams covered everything in a single one. As such it was more popular with students of building construction preparing for their exams and no doubt they kept it at their side for reference throughout their working lives. Although a great deal has changed in building technology since 1906, there is still much to learn from this volume. Of course it will be particularly useful to those who own a building of the period or who are professionals charged with looking after such buildings. But for everyone it provides an invaluable insight into the thinking of the time and an extraordinary snapshot of building in the Edwardian era. Its great benefit is its clarity.