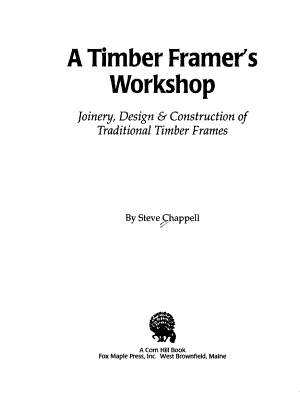 This revised edition of A Timber Framer s Workshop has over 150 new photos and includes updated engineering specifications for pegged joinery, along with expanded in-depth technical information on the joinery, design and construction of Traditional Timber Frames. Illustrated with over 500 photos and CAD drawings. The major portion of A Timber Framer's Workshop was first written back in 1983. Over a period of a number of years several revisions and additions took place, as it was used as the handout workshop manual for Fox Maple Timber Framing Workshops. When this book was first published in 1998, scientific testing results for pegged mortise and tenon joinery simply did not exist. The corollaries that could be made at that time were drawn from testing results for bolted connections. This is common in engineering as the essential physical laws concerning force and motion, primarily Newtonian physics, are symmetrical. However, nothing ever beats a direct test for a specific condition as the results end with an emphatic exclamation point. In the past five or six years testing has at last been carried out for a number of the most common pegged joinery conditions and the results have been published. The impetus for this revision was in large part to update and to include these new testing results so that the readers would be privy to the latest engineering results available for timber frame joinery. Along the way, over 150 new photos and drawings were added and editorial additions were made to clarify specific conditions, or to more fully explain a critical aspect of timber framing. While the essential book is the same, virtually every element is expanded in some way to paint a more vibrant picture of the technical aspects of how to build a traditional timber frame. In addition, there is an expanded element of color and nuance to help the reader more fully understand the magic of timber framing... and that timber framing really is the Jazz of building.The information contained in the book is equally accessible to both the novice looking to build their own timber frame home, and to the professional builder, architect or engineer looking for the latest technical information on this ancient structural building system.

This revised edition of A Timber Framer s Workshop has over 150 new photos and includes updated engineering specifications for pegged joinery, along with expand

There’s never been a better time to “be prepared.” Matthew Stein’s comprehensive primer on sustainable living skills—from food and water to shelter an

Advanced Timber Framing is a comprehensive treatise on the history, design and construction of traditional timber frame roof systems. Beginning with the history

The elegant simplicity of timber frame construction is made accessible to all levels of builders with step-by-step building instructions for one small, easy-to-