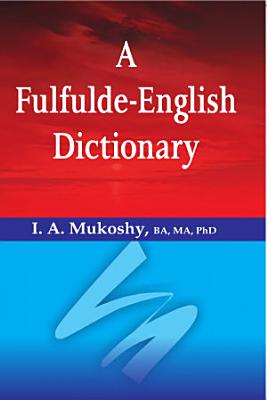 This edition of Fulfulde - English Dictionary is forward - thinking in its intended mission in somewhat noting of dialectal differences as this may be helpful to a wider area and more useful to users. Considerable revisions to the entries have been made to this edition, similarly a lot of alterations to the cross references. Efforts also have been made in order to incorporate at large some vocabularies not included in the first edition for the benefit of students of the language and researchers therein. People and other books also were consulted. Among the books consulted there are Encyclopaedia Britannica, Chambers Dictionaries, Oxford English Dictionary and Hausa - English Dictionary by Rev. G. P. Bargery, O.U.P. 1934 and 1951. Compared with the first edition, many thousands of entries are included aiming at a future comprehensive Fulfulde Dictionary.